Comprehensive Nuclear-Test-Ban Treaty (CTBT) establishes as an international legal standard full-scale ban on all nuclear weapon test explosions and any other nuclear explosions. The document provides mechanisms to monitor the implementation of this prohibition, including the possibility of remote data collection and on-site inspections.

In 2000, Ukraine has ratified the Comprehensive Nuclear-Test-Ban Treaty. Each State Party undertakes in according to Treaty to cooperate in an international exchange of data for monitoring the implementation of the Treaty.

The main objective of the CTBTO for today is establishing of the International Monitoring System (IMS) for the detection and identification of nuclear explosions prohibited by the Treaty. The monitoring system will consist of more than 320 seismic, infrasound, hydroacoustic, radionuclide stations and 16 radionuclide laboratories.

Facilities of MCSM (Ukrainian seismic group) were included to the Treaty, which became a part of IMS as a primary seismic station PS45, which after modernization has become one of the most advanced seismic array in the world for its hardware and software equipment. The costs of operation, maintenance and upgrading of stations covered by the CTBTO. MCSM SSAU and its National Data Centre, defined in the Treaty, as an organization in Ukraine, which carries out technical cooperation with the CTBTO and ensures continuous operation of PS45 station.

The main objective of the NDC is to provide technical advice on issues related to the Treaty's verification regime. For these purposes, the NDC receives IMS data and IDC products.

In cooperation with the CTBTO MCSM carry out: 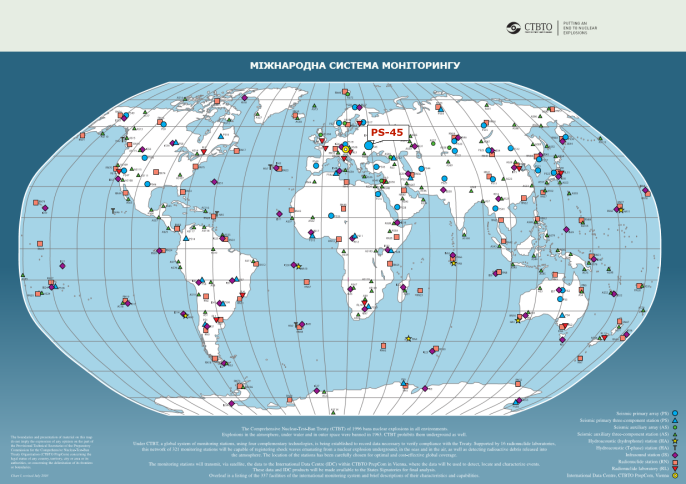 If you felt an earthquake, leave a message.